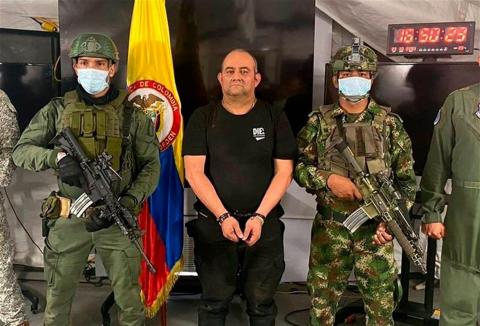 Colombia's government announced on Oct. 24 it is working towards extraditing the country's most-wanted drug trafficker "Otoniel" to the United States, a day after he was captured in a major operation in the jungle.

"This is the path for all those who commit transnational crimes," Molano told reporters later, adding that nearly 30 percent of the many tons of cocaine exported from Colombia went through the so-called Gulf Clan, the country's largest drug trafficking gang, led by Otoniel.

The 50-year-old drug lord, whose real name is Dairo Antonio Usuga, was arrested on Oct. 23 in northwest Colombia's dense jungle in an operation involving some 700 uniformed agents backed by 18 helicopters, according to the army.

The United States had offered a $5 million bounty for information leading to the arrest of Otoniel, one of the most feared men in Colombia.

"This is the hardest strike to drug trafficking in our country this century," President Ivan Duque said Saturday, adding that the arrest was "only comparable to the fall of Pablo Escobar," the notorious Colombian narco-trafficking kingpin.

The government accuses other armed groups such as the Popular Liberation Army (EPL), and rebels who walked away from the peace pact signed with the FARC guerillas in 2016, of financing themselves with drug trafficking revenue.

Born to a poor family, Otoniel joined the EPL, a Marxist guerrilla group that...