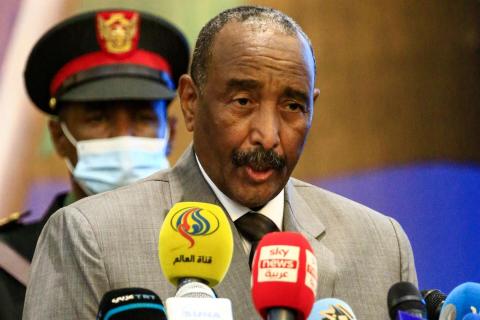 Joint military forces were behind the detention on Oct. 25 of civilian members of Sudan's ruling council and ministers in the transitional government, the information ministry said, in what activists denounced as a "coup".

The detentions came as tensions peaked between the military and civilian figures who shared power since August 2019 following the ouster of autocratic president Omar al-Bashir months earlier.

Internet services were cut across the country and the main roads and bridges connecting with the capital Khartoum shuttered, the information ministry said.

Dozens of demonstrators set car tyres on fire as they gathered on the streets of the capital to protest against the detentions, an AFP correspondent said.

"Civilian members of the transitional sovereign council and a number of ministers from the transitional government have been detained by joint military forces," the ministry said in a statement on Facebook.

"They have been led to an unidentified location."

The statement did not specify whether Prime Minister Abdalla Hamdok was among those detained, despite media reports that he had been placed under house arrest.

The Sudanese Professionals Association, an umbrella group of trade unions which were key in leading the 2019 anti-Bashir protests, denounced what it called a "military coup" and urged demonstrators "to fiercely resist" it.

The developments come just two days after a Sudanese faction calling for a transfer of power to civilian rule warned of a "creeping coup", during a news conference that an unidentified mob attacked had sought to prevent.

Sudan has been undergoing a precarious transition marred by political divisions and...

Sudan PM Hamdok to return to lead government after deal

Sudan: Growing Fears of a Military Coup Occurring At the Moment