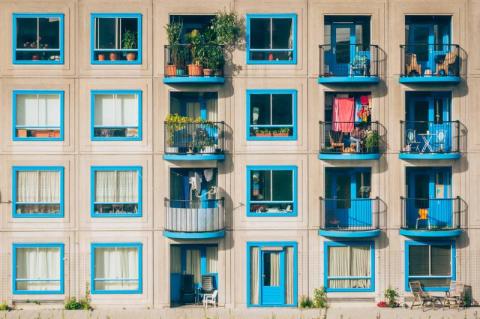 Ljubljana – A new housing estate called Novo Brdo was inaugurated in Ljubljana on Monday. Located in the south-western part of the city, it is set to become one of Ljubljana’s largest neighbourhoods, where 498 vulnerable families and individuals are to be housed.

Črtomir Remec, the director of Slovenia’s Housing Fund, said that the Novo Brdo estate is “the second part of a trilogy of investments” made possible by a EUR 50 million loan from the Council of Europe Development Bank.

“The Novo Brdo neighbourhood project, which also marks the Housing Fund’s 30th anniversary, was carried out in cooperation with the Ljubljana Municipality and is the largest among the projects that recently provided a total of 1,887 new housing units,” he added.

In addition to the new housing units for young people already provided in Ljubljana this spring, Remec announced that another 212-apartment neighbourhood in Maribor is due to be completed next year.

Remec also announced a new cycle of 10 projects with 906 planned housing units that is being lined up, for which the Housing Fund will seek a new loan from the Council of Europe Development Bank.

“A home is a commodity whose value is certainly best understood by those who do not have it,” Environment and Spatial Planning Minister Andrej Vizjak said at today’s opening ceremony, adding that these are most often young families and individuals dealing with housing issues for the first time.

“It is the responsibility of every government to plan housing policies in such a way that every individual or family is provided with adequate housing within a reasonable time frame,” added Vizjak.

He said that he would like to see more such inaugurations, and not only in Ljubljana, but especially in smaller Slovenian municipalities and regions that are experiencing population decline.

The main objective of the housing strategy is therefore to provide additional public rental housing. It is estimated that around 10,000 additional housing units are needed in Slovenia. “The government plans to be able to provide around 5,000 by 2026,” added Vizjak.

Today’s opening was also attended by Rolf Wenzel, the governor of the Council of Europe Development Bank, who highlighted the Novo Brdo project as a concrete example of one of the bank’s main tasks – financing the construction of social or affordable housing.

In the Novo Brdo estate, the Housing Fund expects to provide for a higher living standard, as they want to accommodate several different generations. All the buildings are therefore designed to accommodate young people and families as well as the elderly, they said.

The estate will also host various public services, such as a library and shops, as well as an open outdoor space with plenty of green areas, children’s playgrounds and a pond.