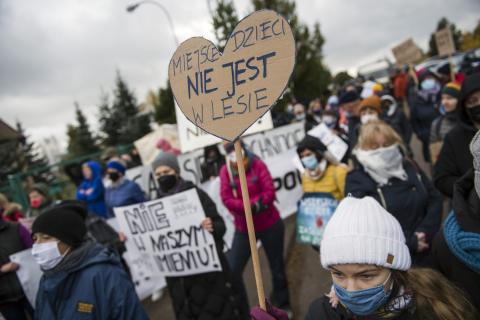 The protest was organised by feminist organisations under the label "Mothers at the Border" and was attended by two former Polish first ladies, Jolanta Kwasniewska and Anna Komorowska.

"The place of children is in a warm home, in their mother's arms," Kwasniewska told the demonstrators, speaking on behalf of Komorowska and Danuta Walesa, wife of former president Lech Walesa, who could not attend for health reasons. "We, Polish women and mothers, can't agree to be put in the position of just observing the drama that's unfolding before our eyes."

Since the summer, the regime of Belarusian President Aleksander Lukashenko has been tempting migrants from the Middle East and Africa to travel to Belarus, whereupon they are sent across the EU borders of Poland and the Baltic states in order to foment a migrant crisis. The cynical ploy is believed to be in retaliation for sanctions that the EU imposed on Belarus for the rigged presidential election in the autumn of 2020 and subsequent violent crackdown on protestors.

The Polish government has responded by ordering border guards to push back the...