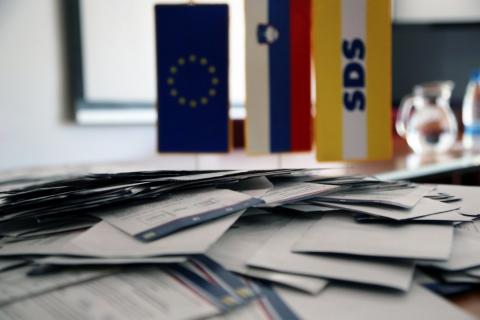 The SDS remains in the lead with 18.6%, as its support has risen by 3.6 percentage points compared to September. The opposition Social Democrats (SD) remain second with 11.5%, also rising by almost two percentage compared to last month.

The SD are followed by the opposition Left at 9%, who gained one percentage point, and the Marjan Šarec List (LMŠ) with 5.6%, which slipped back 1.4 points compared to September.

With 5%, the coalition New Slovenia (NSi) has gained 1.1 points compared to September to overtake the opposition Alenka Bratušek Party (SAB) with 4%, which lost 1.2 points and thus conceded the fifth place.

Meanwhile, the coalition Modern Centre Party (SMC) and the Pensioners Party (DeSUS) remain well below the parliament threshold at 1.2% and 0.9%, respectively.

The proportion of undecided voters (20.9%) has declined by more than five percentage points compared to September, while 8% would not vote for any of the existing parties.

NSi MEP Ljudmila Novak returned to the top of the popularity ranking of politicians to unseat the long-standing public favourite, President Borut Pahor, who recorded one of his worst results yet with coming in fifth.

The poll was conducted by Mediana among 712 respondents.