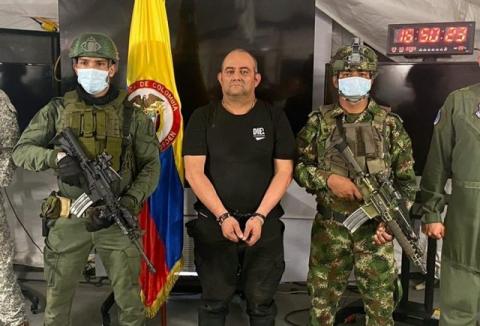 The newspaper "Semana" states that Otoniel, in order to form a network for illegal trade, established connections in Panama, Mexico, the Dominican Republic and Belgium.
suga, better known by his alias Otoniel, is the alleged head of the much-feared Gulf Clan, whose army of assassins has terrorized much of northern Colombia to gain control of major cocaine smuggling routes through thick jungles north to Central America and onto the U.S.
Semana also claims that the file it had access to contains a report on negotiations with the emissaries of the Mexican cartels, the Calabrian and Sicilian mafias in Italy and the drug trafficking organization in the Balkans.
The Colombian armed forces arrested Otoniel during Operation Osiris in a rural area of the Uraba region, located in Antioquia province.
He is accused of delivering dozens of shipments of cocaine to the United States, as well as murdering police officers, sexually abusing children and recruiting minors.

How did the drug lord fall?

Otoniel was arrested in a rural area near the border with Panama.
According to the BBC, Otoniel used a network of rural safe houses. He moved from one to the other and thus hid from the authorities. He did not use a mobile phone, but communicated by courier. In the past, the police found special orthopedic mattresses intended for Otoniel in hiding houses. It is stated that he used these special mattresses to ease back pain.
The newspaper "El Tempo" announced that the authorities managed to determine the exact place where the drug lord was arrested in the end two weeks ago. As it is stated, his movement was followed by more than 50 informants with the help of satellite images. U.S. and British agencies were involved in the search.
...