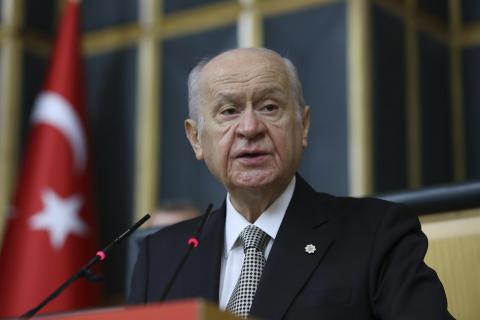 Nationalist Movement Party (MHP) leader Devlet Bahçeli has said his party proposes to send jailed businessman Osman Kavala to one of the 10 countries that called for his release after he finishes serving his prison sentence.

"Our suggestion about Kavala is this: If a verdict is given, it is now a necessity for him to first serve his sentence in Turkey and then be stripped of his citizenship and be sent to [one of] the countries of 10
ambassadors," Bahçeli said at his party's parliamentary group meeting on Oct. 26.

"Everyone should know their place, there is no need for disrespect, we have no tolerance. Western countries' approaches to Turkey are not friendly," he added.

He identified the joint statement by the 10 Western countries on Oct. 18 as "worthless" and "unlawful." He accused these ambassadors of the U.S., Canada, Finland, Sweden, Denmark, Norway, New Zealand, the Netherlands, Germany, and France of attempting to be "advocates" of Kavala.

Kavala faced charges over the 2013 Gezi Park protests, a small number of demonstrations in Istanbul that later transformed into nationwide protests which left eight protesters and a police officer dead. He was acquitted of all charges in February 2020, however, an appeal court overturned this verdict in January.

Kavala was also accused of involvement in the 2016 defeated coup orchestrated by FETÖ in Turkey. He was remanded into custody on charges of spying in March.