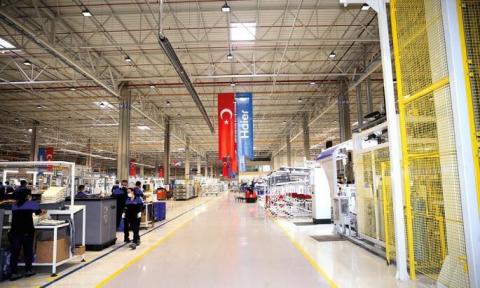 The total of the investment will rise from its initial level of 40 million euros to 85 million euros next year to create 1,600 jobs., the company executives said.

"Turkey is the second largest country in white goods manufacturing after China. Haeier, which is a new company, is number one in the world," said Fierling.

Besides its Candy and Hoover brands, the company will start to sell products under its main brand in Turkey next year, he added.

In the 45 million-euro factory established in Eskişehir, nearly 1 million dishwashers will be produced annually by 700 employees, according to Fierling's remarks.

Haier Europe production director Mehmet Ali Karasu said that an adjacent factory, which will be built on a land of 44,000 square meters, will create 900 jobs.

Some 1.5 million drying machines will be manufactured in the second factory, said Karasu.

Turkey is expected to attract more foreign investments after global giants such as IKEA, Boehringer Ingelheim, LPP and DW Reusables made inroads in the country, trade representatives have said.

Molak Nowakowski, president of the Polish-Turkish Chamber of Commerce, said Turkey's investment environment and incentives are suitable for foreign direct investments from Europe and other countries.

Turkey dominates in the field of logistical infrastructure, he noted, and as a result Polish companies are looking to Turkey instead of China.