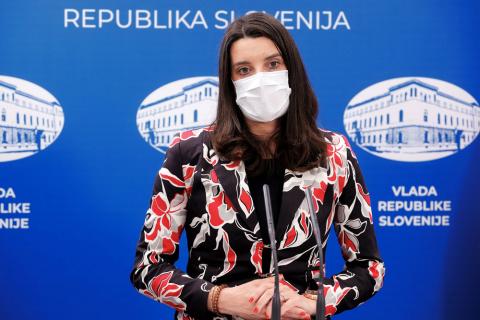 Ljubljana – Mariya Gabriel, the European commissioner for innovation, started her working visit to Slovenia on Tuesday by calling for supporting innovation in Europe in the light of current and future challenges and to help Europe move to a digital, inclusive and green society.

The European commissioner for innovation, research, culture, education and youth spoke at the opening of the EU Next Generation Innovators Summit & Investment Conference in Ljubljana today.

“National recovery and resilience plans will lay the foundations for a pan-European innovation ecosystem that is competitive, smart, sustainable, cohesive, inclusive and fair,” said Commissioner Gabriel.

But to achieve this pan-European investment ecosystem, certain challenges will have to be overcome. Gabriel sees the problem in a lack of local links between innovation ecosystems within the EU and insufficient transfer of new technologies to the market.

“These are times of big choices that will set Europe’s long-term direction, and we need to make sure that we build an environment where innovation can thrive as the basis for an economy that works for everyone and leaves no one behind,” she said.

Gabriel also believes that the EU has some existing advantages, especially in the fields of science and industry. “But as the health crisis has shown, the EU cannot afford to be dependent on other technological powers,” she warned.

Economy Minister Zdravko Počivalšek also addressed the conference, saying that he sees start-up and scale-up companies as the future of Europe.

“These are companies that develop ground-breaking innovations and respond quickly to real-world needs, creating new jobs and forging partnerships with traditional and industrial companies,” Počivalšek said in his opening address.

The minister believes that it is time for structured dialogue at national and EU level and for building links between investors and start-ups.

The focus of this year’s Next Round.eu international two-day innovation conference are investment opportunities for Slovenian and European companies in the expansion phase, said the organisers.

Around 300 participants are taking part in the conference entitled “The next generation of tech giants will be European”, including representatives of international and domestic venture capital investors and start-ups from all over Europe.

Another international conference entitled New European Research Area – Towards a Responsible Knowledge-Driven Society of the 3rd Millennium was opened by Commissioner Gabriel on Tuesday at Brdo pri Kranju, together with Education Minister Simona Kustec.

“Delivering on the idea of a European Research Area requires an implementation of existing priorities and initiatives, but also an expansion of priorities to address the challenges we face,” said commissioner Gabriel.

In their opening remarks, both the minister and the commissioner also underlined the importance of cooperation. “Cooperation at the political level is not enough – voices, ideas and recommendations from the research and scientific community need to be heard as well,” added Kustec.