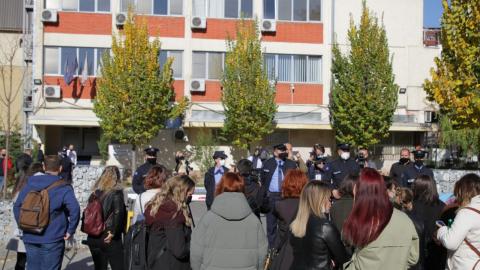 Kosovo civil society activists protested on Tuesday in front of the Kosovo Judicial Council in Pristina after a verdict handed down by a local court in the town of Peja/Pec sentenced a man to eight months and eight days in prison for sexually abusing a 15-year-old.

"This decision, as well as being delayed and illegitimate, is also deeply sexist as it continues to normalise and amnesty violence against girls and women," said Liridona Sijarina, an activist from the Collective for Feminist Thought and Action.

In July this year, the Basic Court in Peja/Pec found the defendant, who was only identified by the initials P.K., guilty of abusing the teenage girl in 2012.

P.K., who had pleaded guilty, was jailed for eight months and eight days, even though Kosovo's legislation allows punishment from 5 years to 20 years in prison for such offences.

P.K. was in pre-trial detention for the exact amount of time to which he was sentenced, so he did not have to serve any more prison time.

Together with another minor, he kidnapped the victim by threatening her with a knife as she was leaving hospital. According to the indictment, the 15-year-old victim was taken to an abandoned house where P.K. and two other minors abused her until she managed to leave in the morning.

Trial judge Florije Zartriqi considered ten mitigating circumstances when deciding on the sentence, such as the fact that the defendant pleaded guilty, expressed regret, did not have previous convictions, and was 21 years old at the time of the crime and therefore immature.

The court did not find any aggravating circumstance in the case; a decision that was criticised by the protesting activists.

"These institutions that are violating our girls and women must be...