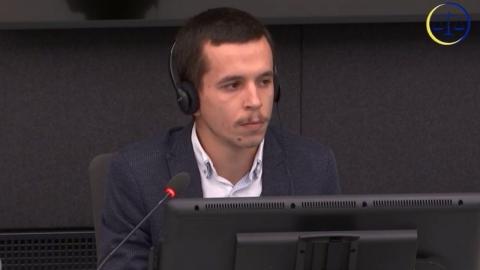 Halil Berisha, a journalist from Pristina, told the trial of Kosovo Liberation Army War Veterans' Organisation leaders Hysni Gucati and Nasim Haradinaj at the Kosovo Specialist Chambers in The Hague on Tuesday how he received the allegedly leaked war crimes case files from the defendants.

Berisha said that he took "around 1,000 pages of documents" from the KLA War Veterans' Organisation in September 2020.

Gucati and Haradinaj are accused of obstruction of justice and witness intimidation because they received the documents, which contained confidential information about protected witnesses in the cases against Kosovo Liberation Army ex-guerrillas, and urged media to publish extracts from them.

Berisha was working for the Pristina-based Infokusi news website when he attended a press conference organised by the KLA War Veterans' Organisation in September 2020.

"The volume of documents was huge, it was not possible to record

all of them so I asked [Gucati and Haradinaj] if I could take some of the documents," he said.

"As far as I remember, we published articles about the documents only during the time we were in possession of them. After that, we continued to report about this issue but not about the specific documents because we didn't have them," Berisha said.

He explained that during the press conference, the heads of the KLA War Veterans' Organisation said that "those documents were brought by someone earlier in the morning that day and that they are presenting them to media".

"They said that the documents belonged to the Specialist Chambers," Berisha said.

The witness explained that after the press...