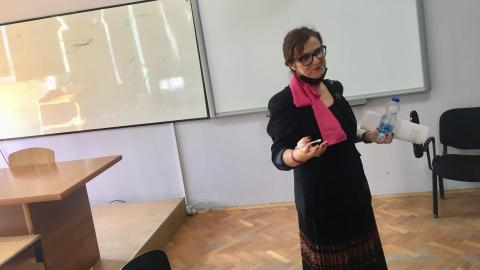 "Balkanistica was originally designed as a bilingual programme and its content will be unique. It is not only about the scientific aspects of the languages in the Balkans, but also the cultural, historical and literary aspects," Rugova told BIRN.

The programme is significant because linguistic divisions in Kosovo have widened over several decades, and continue to be endemic, reflecting persistent inter-ethnic animosity.

When Kosovo was a province of Serbia in the former Yugoslavia, the Albanian language was used in official documents and communications, alongside what was then known as Serbo-Croat. This ended in 1989, when Slobodan Milosevic's government abolished Kosovo's provincial autonomy.

From that point on, Serbo-Croat was the only official language, even though ethnic Albanians constituted the majority of Kosovo's population. Universities and secondary schools were also closed to ethnic Albanians, so they set up their own parallel education system, in which Serbo-Croat was not taught. This continued until Milosevic lost control of Kosovo in the 1998-99 war.

All of these developments widened the linguistic divide, which has continued since the war ended. Today, Serbia still maintains control over the education system in Serb-majority areas of Kosovo, where schools use the Serbian state curriculum, which doesn't include the teaching of Albanian. Meanwhile, ethnic Albanian pupils are not taught Serbian.

"The past still has a heavy influence, and it will take a long time until the tensions are relieved. Based on the history of my family, who suffered persecution by the Yugoslav regime, there are still remnants of the painful past. However, these dividing lines are slowly fading away," said Rugova.