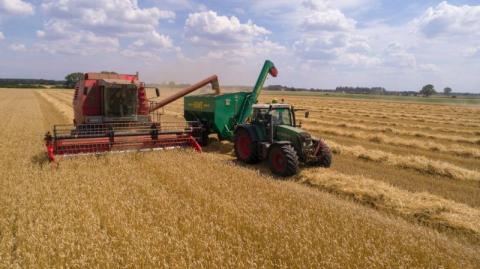 Krakow – Agriculture Minister Jože Podgoršek was invited by his Polish counterpart Grzegorz Puda to attend a meeting of agriculture ministers within the Three Seas Initiative. The ministers discussed securing feed protein production in the EU and the transition to a green and digital agricultural economy.

Poland has organised the meeting with the aim of strengthening dialogue and cooperation among the 12 participating countries and establishing common positions on Common Agricultural Policy issues after 2023, said the ministry.

An important aspect of the reform of the new Common Agricultural Policy is reducing protein deficiency. The most common protein-rich crops are soya, legumes and oilseeds, which are currently largely being used for animal feed, while less and less is used for human consumption.

“It is important to emphasise the potential of sustainable protein crop production, to make farms more self-sufficient in animal feed, to establish processing chains through the formation of farmer groups and construct decentralised small and medium-sized enterprises,” said Podgoršek.

He added that the further development of vegetable protein production in the EU would not only bring economic benefits for food and feed producers, but also a number of environmental and climate benefits.

Speaking about the digitalisation of agriculture, Podgoršek pointed out that digital technologies supported farmers in providing safe, sustainable and quality food.

“Our main objective in the field of digitalisation is to improve farming models so that we achieve more with less input, using less raw materials, energy and labour, while at the same time achieving more and improving the quality and quantity of our produce,” added the minister.

The Slovenian Ministry of Agriculture, Forestry and Food is also planning to set up a National Food Institute as part of the recovery and resilience plan.