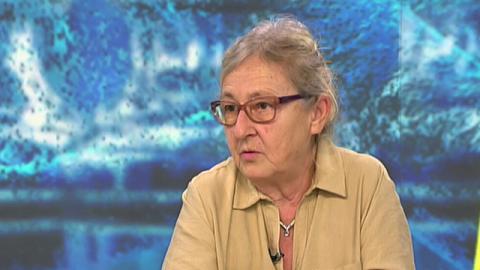 The fourth COVID wave reached the peak of the previous one. This was commented on bTV by Prof. Mira Kozhuharova, a consultant to the Minister of Health. She predicted that there would be another wave and was adamant that the measures introduced to limit the virus were not late.

Prof. Kozhuharova pointed out that the measures were announced in early September, but according to her people were waiting for the last moment:

"The tolerance was very high. As of September 2, the incidence was in the red zone. This imposed restrictions that could be observed if there were certificates. On September 19 we were already in the dark red zone. The measures were not late, they were introduced just in time. There is a penultimate point in the plan to deal with the pandemic, and it says that when everything closes, you can work with certificates. People are willing to act at the last minute. Things were clear with the publication of the plan. Everyone hoped that it will pass. That did not happen."

She pointed out that during this wave, the age of 0 to 19 years has reached the highest increase in morbidity since the beginning of the pandemic. "The Delta variant infects children and young people to a much greater extent," said Prof. Mira Kozhuharova.

Regarding the sparing tests for the children, the epidemiologist commented that they will not be obligatory and if the parents do not agree, their children can stay at home while the epidemic wave lasts.

"It's not about messing around in the nose and throat, it's about examining saliva," she explained of the tests, adding that the sample is specific to a particular antigen. These tests are highly reliable, but not reliable at the level of PCR and are valid for up to 48 hours,