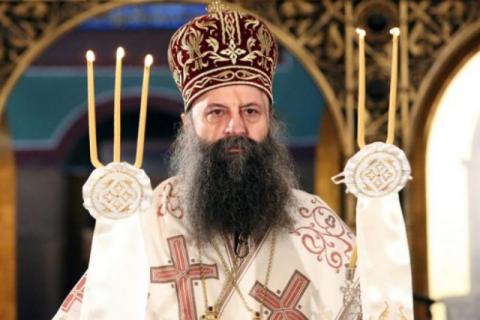 The Serbian Orthodox Church, the most loyal ally of modern Serbian chauvinism in the Balkans, began celebrations on the 700th anniversary of the death of King Stefan II Milutin (1282-29 October 1321) in RN Macedonia, but without inviting local scholars, a BGNES reporter reported.

In an 8-minute video address, Serbian Patriarch Porphyry glorified the deeds of King Stefan II Milutin without mentioning Macedonia. No Macedonian scholar or local church representative was invited to the forum, which is being held on the territory of the RNM. At the same time, the Serbian patriarch spoke at length about the conquests of this medieval Serbian ruler, who had conquered significant parts of present-day northern Macedonia and Albania.

In recent years, the role of the Serbian Orthodox Church in Belgrade's diplomacy has multiplied. Many Western analysts and Balkan politicians, including Montenegrin President Milo Djukanovic, have repeatedly publicly warned about its policies in support of Serbia's aspirations for neighboring countries.

The SPC plays an important role in the so-called "Serbian World" project, in which Belgrade and the heirs of Yugoslav dictator Milosevic - President Alexander Vucic and Ivica Dacic - want to regain influence in neighboring countries. Montenegro and RNM are subject to the greatest spiritual aggression.

Under King Stephen II, Milutin began the rise of the Serbian medieval state, primarily at the expense of the Second Bulgarian Kingdom, which in the second half of the 13th century saved the Balkans and European civilization from the Tatar hordes. Bulgaria is severely weakened and this creates a favorable...