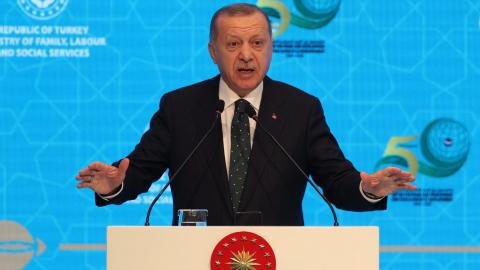 "With the new statement made by the same embassies today, a step back was taken from this slander against our country and our nation. I believe these ambassadors … will be more careful in their statements regarding Turkey's sovereign rights," Erdogan said.

The United States embassy in Ankara stated on Monday that it respects the laws and regulations of Turkey.

"The United States notes that it maintains compliance with Article 41 of the Vienna Convention on Diplomatic Relations," the US embassy said on Twitter.

Article 41 stipulates that diplomats must not interfere with the internal affairs of the host state.

Canada, the Netherlands and New Zealand also posted similar messages, while Norway and Finland retweeted the US message.

Erdogan said on Saturday that he had told his foreign ministry to declare the ten ambassadors persona non grata after their embassies sent a joint letter to the Turkish government on October 18 calling for the immediate release of philanthropist and rights activist Kavala.

Kavala has been in prison for four years without a conviction, despite rulings by the European Court of Human Rights stating that he should be released.

"The continuing delays in his trial, including by merging different cases and creating new ones after a previous acquittal, cast a shadow over respect for democracy, the rule of law and transparency in the Turkish judiciary system," said the Western embassies' joint statement.

The statement angered Turkish officials, who accused the embassies of trying to influence the judicial process.

Kavala is a former board member in Turkey of Open Society Foundations, a network...