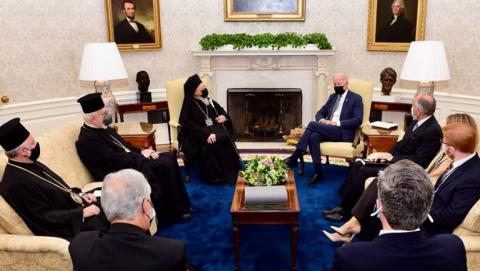 Ecumenical Patriarch Vartholomeos had a one-hour meeting yesterday afternoon with US President Joe Biden during which the topics of discussion included the re-opening of the patriarchate's Halki Theological Theological Seminary, which was shut down by the Turkish state half a century ago, in 1971, and environmental issues.

The re-opening of the seminary and protection of the environment have been a steadfast mission for Vartholomeos during his 30-year tenure as patriarch.

That the meeting with the US President lasted one hour was an indication of the importance that Washington attaches to the religious freedom of the patriarchate in Turkey, and the respect for his dedication to the environment and inter-faith dialogue and understanding.

"The discussion involved the shared sense of urgency ushered by the climate crisis. The Ecumenical Patriarch noted that the need for political leaders to respond is particularly timely in light of the imminent COP26 meeting in Glasgow," according to a statement released last night Greek time by the Greek Orthodox Archdiocese of America.

«His All-Holiness also thanked President Biden for his decisive response to the pandemic and for his readiness to support developing nations in securing Covid-19 vaccines for their populations. The Ecumenical Patriarch expressed his sincere hope for the re-opening of Halki Seminary, which was forcibly closed fifty years ago,» the statement noted.