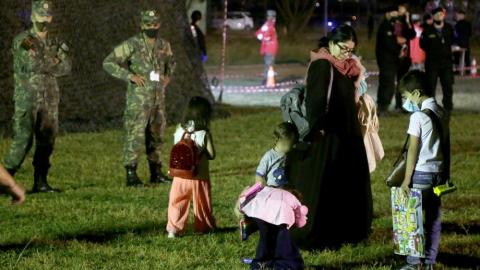 Seventeen Afghan journalists sheltering in Albania following the Taliban takeover are working away from home for two Afghan newspapers that they continue to produce online, Etilaat e Roz (Kabul Now) and Hasht e Subh (8am Daily).

For now, they are working from the rooms in the hotels where they are staying, while preparing a room which will serve as a joint office and newsroom.

Elyas Nawandish, the online chief editor of Etilaat e Roz, who reached Albania in late August and is staying in Lezhe, northern Albania, told BIRN that they are covering events at home, as well as things related to Afghanistan, from a distance.

Mujibrahman Mehrdad, editor-in-chief of Hasht e Subh (8am Daily) told BIRN that they work together with colleagues still present on the ground in Afghanistan.

"We are doing a hybrid job, since our office is still in Kabul and our reporters cover everything, but from here we cover the issues we see here and also analyze current affairs," he told BIRN.

Albania has hosted around 2,000 Afghan refugees from Taliban rule, including around 50 journalists, since late August, when the Taliban took power and the print media were closed.

The Afghans in Albania have been granted "temporary protection" status for one year, with the possibility of extension, if needed.

Nawandish told BIRN that the exiled journalists have to work for free due to the lack of funds, and lately organized one hotel room as an office.

"Today I'm preparing a room to start our...