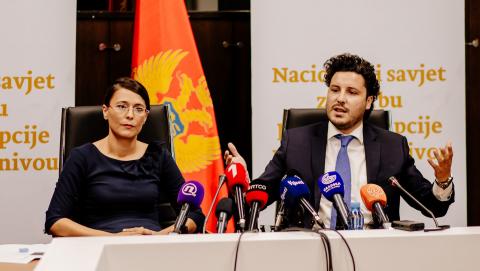 But Vanja Calovic-Markovic, head of the anti-corruption NGO MANS, said the results so far were underwhelming.

"Despite big actions against drug and tobacco smuggling in the country, the police haven't launched any financial investigations," Calovic-Markovic told BIRN. "As long as smuggling is tackled by arresting only truck drivers we will not know where the money goes and who organizes the smuggling."

"Surely truckers won't lead us to the organized crime group bosses, but the paths are taken by the money might."

Organised crime 'no longer has state protection' Montenegrin government officials at a press conference after the seizure of 1.4 tones of cocaine. Photo: Government of Montenegro

Through 30 years of government led by the Democratic Party of Socialists, DPS, the country of 620,000 people at one stage became almost synonymous with organized crime, a haven for drug and cigarette smugglers who operated with ease.

The DPS, led by Montenegrin President Milo Djukanovic, lost power last year in an election in which three political blocs secured a slender majority and came together to elect a 'cabinet of experts' led by Prime Minister Zdravko Krivokapic.

Krivokapic promised action. "The crime scene is still dominated by gang clashes, while the number of processed cases of cigarette smuggling is still insufficient," he said on taking power.

"Those who led the country supported such behavior, but we will prevent with the help of independent state institutions."

Early this year, the government appointed a new head of the police directorate and dismissed a number of senior officers.

"For the last thirty years, Montenegro has been recognised internationally as a smuggling country, through...