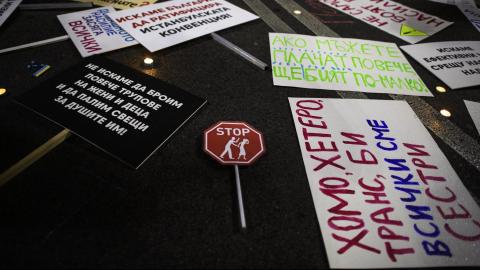 Banners lie on a street during a rally against violence against women marking International Day for the Elimination of Violence against Women in Sofia, 25 November 2019. EPA-EFE/VASSIL DONEV

The judgment follows a March 2020 request from the Supreme Court to the Constitutional Court to define the term gender/sex in the context of Bulgaria's constitution.

The request followed fierce debates over the treaty between 2018-2019. Controversy arose around the treaty's use of the term "gender" as a social construct as opposed to the biological "sex".

[In Bulgarian, the word for both is "пол", which twisted the meaning of the word "gender" in entirely new context. Since the outcry, "gender" is now often used as a slur for LGBT people].

Further, the court said the legal status of transgender people, referred to in the case by the outdated term "transsexuals", could be resolved through changes in legislation, but that currently local institutions cannot be obliged to accept the self-determination of citizens to a sex that is different from their biological one.

The court also noted that the constitution associates the biological sex "woman" with the social role of the mother.

"The decision doesn't worsen the situation of trans people in Bulgaria in a major way, as it already is very complicated," Ivanova said.

"But there are several important layers to highlight: first, to account for the role of a woman only as a mother is a very sexist and dated view; second, the court says that a marriage between a woman and a man is deeply rooted in Bulgarian law while in fact, it dates back to 1991 when the most recent...