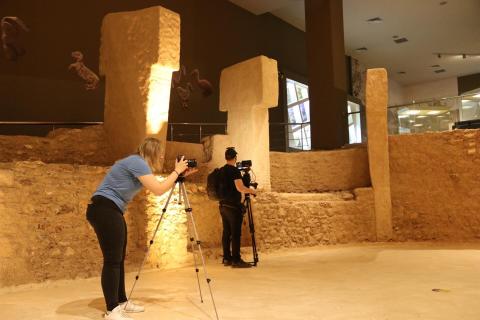 Discovery Channel, one of the best-known documentary channels in the world, has begun filming documentaries on history in important places of the southeastern province of Şanlıurfa, particularly Göbeklitepe, which is considered the "zero point of history."

Göbeklitepe, which has been on the UNESCO World Heritage List for three years, continues to be the subject of books, films, documentaries, TV series and animated films. The historical ruins are at the center of the attention of many national and international screenwriters and directors, thanks to their inclusion in the UNESCO World Heritage List.

Along with Göbeklitepe, which is visited by thousands of people from Turkey and abroad, Karahantepe, which was recently promoted by the Culture and Tourism Ministry, also attracts attention.

Discovery Channel has recently started shooting documentaries at the Şanlıurfa Archaeology Museum, Karahantepe Ruins, which are among the important settlements of the Neolithic period, and Göbeklitepe.

Sait Yardımcı, producer and president of the Turkish Film Commission, said that they help contribute to the promotion of Turkey by working in cooperation with foreign film and production teams. He expressed that they were currently focusing on historical venues within the scope of a project.

Stating that the recognition of Göbeklitepe as the "zero point of history" is significant for the project, Yardımcı said: "We have filmed in five locations in Turkey so far. There are many important historical sites in Turkey. Göbeklitepe is the most important one among them, where humanity began. Last month, the ministry announced the promotion of Karahantepe to the world. We were the first team to shoot a documentary in Karahantepe. At the same time, we have...

US changes to Turkey’s preferred spelling at ally’s request