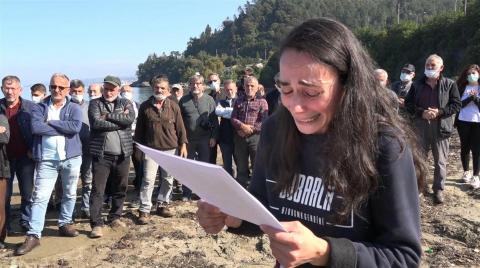 The house of a prominent environmentalist who creates awareness about nature with her critical paintings has been burned down in the Black Sea province of Trabzon just hours before she attended a press conference against cultural fishing, bringing the possibility of attempted arson in mind.

"I can re-erect my burned house, but when we lose the sea, it's irreversible," 37-year-old artist Gökçe Erhan said in tears while reading the press release, blaming the cultural fishing for the destruction of the marine ecosystem.

A fire broke out late on Oct. 23 in Erhan's two-story house in the Sürmene district's Gökçesu neighborhood. The cause of the fire is unknown.

Erhan evacuated the house where she lived alone and called the firefighters to extinguish the fire.

Despite the massive efforts, the house was reduced to ashes, with all her paintings.

As the gendarmerie units got suspicious of this fastly spreading fire, which broke out just hours before a press conference the environmentalist was going to attend, they started an investigation into the matter.

"I heard some voices behind the house before the fire," Erhan told the security units.

After a while, I saw flames and light smoke rising. I went outside and saw that the fire was spreading at the back of the house," she added.

After losing her house, contrary to expectations, she participated in the press conference conducted by the Çamburnu Nature, Culture and Arts Society.

"Culture fishing damages the marine ecosystem, and we strongly oppose the establishment of aquaculture plants here," Erhan said at the beginning of the press conference.

"Since the small fish caught in the seas will be used as bait in the farms, the small sea fish will be extinct...