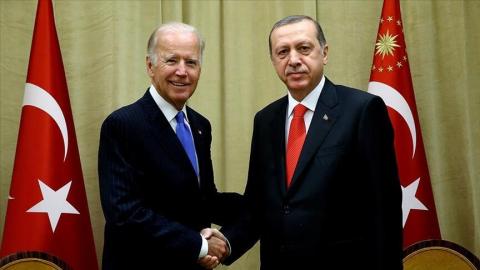 President Recep Tayyip Erdoğan has said he would meet his U.S. counterpart, Joe Biden, on the margins of the COP26 climate conference in Glasgow.

"The agenda for Rome and Glasgow appears to have changed. We are likely to meet in Glasgow instead of Rome," Erdoğan on Oct. 26 told journalists on board his return flight from a trip to Azerbaijan.

Erdoğan said he will discuss with the U.S. leader the $1.4-billion payment plan for the F-35 fighter jets that Washington refused to deliver to Turkey after Ankara purchased Russian-made S-400 defense systems.

The most important subject in this meeting would be the F-35 issue, he said, noting that there are signals from Washington to deliver the F-16 warplanes in return for Turkey's money paid for F-35 programme.

The meeting, which would be the two leaders' second since Biden was elected president, comes as Turkey seeks compensation after Washington kicked Turkey out of its F-35 fighter jet programme for buying the Russian missile defence system.

The meeting would also come hot on the heels of a new diplomatic spat that saw Erdoğan threaten to expel the U.S. and nine other Western ambassadors over their statement regarding the release of a jailed Turkish businessman.

His threat to expel 10 ambassadors was not "a show of strength to someone, it just meant that the ambassadors...