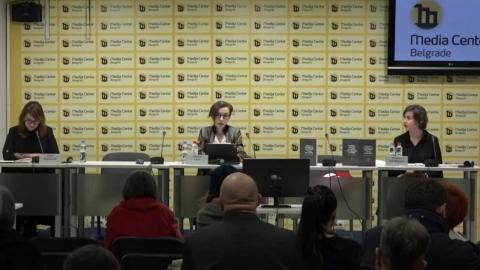 The Serbian authorities are using memorialisation of the 1990s wars to manufacture a populist narrative of national pride and victimhood for political advantage, says a new report by the Humanitarian Law Centre which was launched on Tuesday evening in Belgrade.

It claims that since the Serbian Progressive Party came to power in 2012, "the wars of the 1990s became the focal point of official memory politics", with politicians utilising a populist discourse of a "return to national pride".

Officials have also used the argument that "previous governments and international community coerced the Serbian nation to feel ashamed about its heroes and victims of the 1990s wars", the report says.

The Serbian Progressive Party was founded in 2008 by politicians who were previously members of the ultra-nationalist Serbian Radical Party, which is led by Vojislav Seselj, a convicted war criminal.

Some of the Progressive Party's members were prominent figures during the rule of Slobodan Milosevic in the 1990s, like President Aleksandar Vucic, who was the Serbian minister of information during the Kosovo war.

The report says that the Serbian authorities focus on two main issues for memorialisation - the Kosovo war and the 1999 NATO bombing of Yugoslavia, and the Croatian Army's Operation Storm, which ousted Serb rebels and caused many Serbs to flee Croatia in 1995.