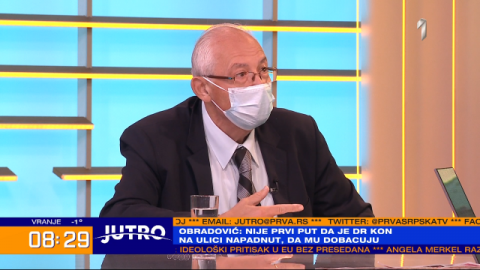 He spoke about an incident in which protesters shouted in front of his apartment that he was Ustasha and compared him to the Nazi doctor Josef Mengele.
"It's not pleasant to experience it with my family... I've had those shouts before... I'm a patriot, I'm ready to sacrifice myself for the country. I didn't expect anyone to think of doing this performance. I'm ready to seriously sacrifice myself, to work for Serbia and give the maximum for Serbia", stated Kon.
"Something that is completely opposite to my whole being, the insult was fierce... When a person sees this, he doesn't know what to say," the epidemiologist added.
Kon referred to the COVID pass and said that they were brought for health protection and stated that it was a temporary measure.
"They (protesters) defend the virus by preventing vaccination. They give it space to spread... They are fighting to spread the virus, I don't believe they are doing it consciously. We completely forget what situation we are in and act as if nothing is happening. COVID passes are there to slow down the virus, vaccination is the only way to prevent this", said a member of the Crisis Staff.
He stated that those who undermined the trust of the Crisis Staff, helped anti-vaxxers. Speaking about anti-vaxxers putting on a yellow ribbon and identifying with Jewish victims, he said: "What I would say would not be for television. Whoever does that does not exist as a person for me. Imagine something like that. It is completely unacceptable. I better keep quiet".
"Passions have to calm down. Those who do that force divisions. We have to be calm, I have to suppress negative emotions and keep working. There is no way out of this situation without vaccination. Circulation of the virus can be...