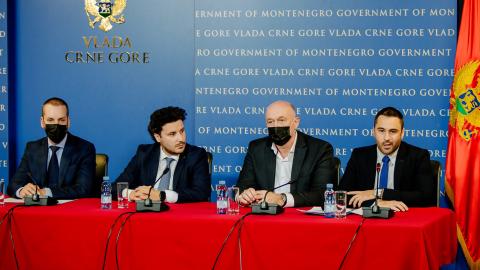 At the presentation of the draft law, Abazovic said Montenegrin society was ready for such an "anti-mafia law".

"Our goal is to put an end to illegal enrichment of criminals and state officials. I would call it a law against the mafia. The government has completed the first step but the main work starts after its adoption in parliament," Abazovic said. "I expect parliament's support by adopting the law as soon as possible," he added.

The draft Origin of Property Law will go before a public hearing during the next 20 days and then its final version will be sent to parliament.

The law needs the support of at least 41 MPs in the 81-seat chamber, but parliament has not held a plenary session - when laws are debated and voted on - since July 23.

A month earlier, the largest coalition in the ruling majority - the pro-Serbian Democratic Front - announced a boycott of parliament, blaming Prime Minister Zdravko Krivokapic's refusal to reshuffle the current cabinet of experts and bring in party-political ministers.

When the new government was elected last December, Krivokapic promised legislation on the origin of property. One month later, Deputy PM Abazovic said the bill was ready and would be crucial to Montenegro's EU integration.

But when the government unveiled its plan for 2021, the bill was postponed for the end of the year.

The Ministry of justice's civil and minority rights general secretary, Boris Maric, said the draft law was compiled in cooperation with international experts, noting that the State Prosecution will form financial teams to examine suspect property. Maric said the property will be...