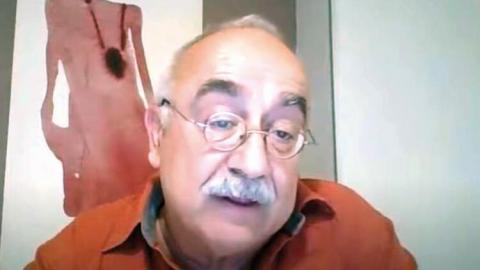 Turkish-Armenian writer Sevan Nişanyan, who has been living in Greece after fleeing a Turkish prison four years ago, has said that he has been declared "persona non grata" by the Athens administration.

"I learned the announcement of persona non grata by Greek authorities when I was trying to go back to the island of Samos [where I live] from my visit to Belgrade, Serbia," he said in his Youtube broadcast.

According to the writer, Greek officials just said, "State secret," when he asked the reason for the decision.
Nişanyan estimated that "a comprehensive study he made on the Turkish and Bulgarian names of settlements in the northern part of Greece may be the reason."

"I made researches on the etymological roots of settlements in Turkey for a decade. Then I included the neighboring countries in my research," he said in his YouTube program.

"Most of the settlement names in northern Greece is either Turkish or Bulgarian. There are almost no Greek names," he added.

His prediction is that "Greek authorities had a feeling of 'What is this man doing?' strongly."

Nişanyan, 64, author of many books on linguistics, was given a jail sentence of 16 years and seven months for criticizing the ban on criticism of Prophet Mohammed in 2012 in Turkey. Escaping prison in 2017, he fled to

Greece and started living in Samos.
For the last two years, he has been broadcasting a program on YouTube on Sundays.

In his last social media post he uploaded in Belgrade, he put a photo of himself walking, saying, "Nişanyan. It is time to cruise once again."