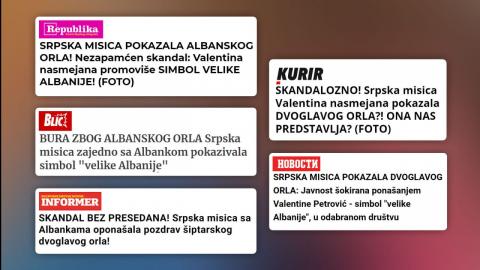 Valentina Petrovic apologised and pulled out of the Miss Intercontinental beauty pageant on Tuesday after Serbian media reacted furiously to a photograph of her with other contestants from Kosovo, Montenegro and Albania making hand gestures in the shape of double-headed eagles was published on Instagram.

Republika, the digital version of tabloid Srpski Telegraf, called the photo "shocking" and said that Petrovic had "horrified Serbia", while Politika newspaper wrote that the picture had "rightly ignited social media" with anger at the model's use of the Albanian national symbol.

Petrovic wrote on Instagram that she "had no bad intentions" and that having the photograph taken was "momentary recklessness and stupid spontaneity".

She apologised "to all members of my nation, the people of Kosovo and Metohija, my company and my family".

"I am very sorry, so in addition to a deep apology, I made the decision to ask the organisers for permission to leave the competition and thus relieve myself of the current pressure I am carrying," Petrovic wrote. The contest will be held in Sharm el-Sheikh in Egypt on Friday.

Use of the Albanian double-headed eagle gesture has angered Serbian nationalists in the past. In April 2019, a baker in the Belgrade suburb of Borca became the target of nationalist fury after right-wingers on Facebook reposted a two-year-old picture of his cousin posing while making the gesture.

Nationalists gathered in front of the bakery, shouted nationalistic slogans, played Serbian patriotic songs, put stickers saying "Kosovo is Serbia" on the windows, and threw pigs' heads at the bakery - a reference to the baker being a Muslim.

In June 2018, during a football match between Serbia and...