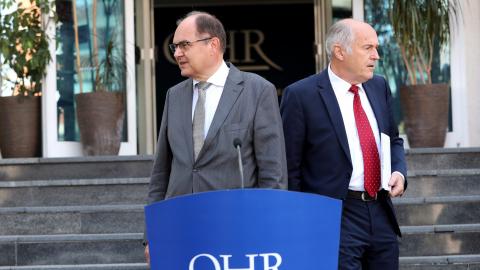 To be sure, the strategy of working with elected officials has succeeded in the past when international officials and diplomats have taken a firm approach. This was especially so during the years up until 2006.

For the EU, the problem is the cognitive dissonance between its vocal support of enlargement and lack of appetite for pushing the politicians to pursue the difficult reforms necessary to realize it any time soon. As far as Brussels is concerned, the moment at hand is rarely propitious for making uncomfortable choices.

For the US, interest in robust high-touch engagement in Bosnia and Herzegovina has long passed. When Bosnia's instability threatened US vital national interests in NATO and the EU, Washington's investment, as evidenced in the Dayton Agreement, and up through the early 2000s, was substantive and effective.

For the most part, Washington prefers to lead from behind these days, deploy sanctions as its preferred tool of action, and stave off crises by occasional and for some increasingly risible threats to intervene.

For both the EU and the US the limited success in achieving constitutional and other major reforms since 2005, and their reluctance to act more robustly in the increasingly corrupt and flawed 'democracy" that is Bosnia and Herzegovina have made both wary of investing and potentially falling short yet again, especially in a small fractious country whose potential for ethnic violence and war in the heart of Europe has been, if not, forgotten, not taken as seriously as it should be.

So how to move Bosnia and Herzegovina forward in these circumstances?  The days of big bang international community interventions like Dayton are over. Likewise, beefing up EUFOR, the European force in Bosnia and...