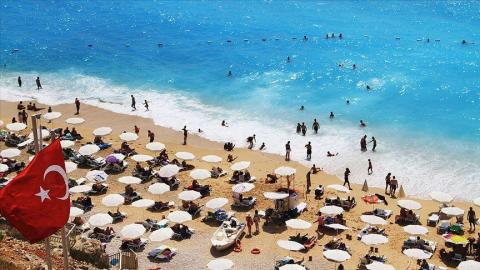 Turkey aims to attract as many as 50 million foreign holidaymakers and generate $50 billion in tourism revenues in 2023, Culture and Tourism Minister Mehmet Nuri Ersoy has said.

Following a difficult year due to the COVID-19 pandemic, foreign tourist arrivals in Turkey started to revive in the past months, the minister told broadcaster Al Jazeera in an interview in the Qatari capital of Doha.

He noted that global tourism activities declined 65 percent because of the pandemic.

"Spain and Greece are Turkey's competitors in tourism, and they have been less affected from the outbreak, but Turkey has been seeing a revival in tourism activity recently," the minister said, noting that the deprecation of the Turkish Lira helps Turkey lure foreign visitors.

However, there has been a decline in the number of tourists traveling to Turkey from Arab countries since the start of the year, according to Ersoy.

An agency has been set up in Qatar to promote tourism destinations in Turkey, Ersoy added.

He also said that the Culture and Tourism Ministry had signed an agreement with the Trade Ministry to facilitate foreigners' entry to Turkey for health tourism purposes, which is becoming a large industry in the country.

Recently, Ersoy revised Turkey's tourism targets upwards for this year. The country expects to host 28 million foreign tourists and $22 billion in tourism revenues in 2021, according to the minister.
Turkey hosted nearly 4 million tourists in August.

Despite posting a year-on-year rise of 119 percent, the figure was 37 percent down from its pre-pandemic level in August 2019.

In January-August, more than 14 million foreign holidaymakers visited the country, a rise of 94 percent from the same period...

Winter not over, but Europe braces for the next one

Turkey to host summit of gas buyers, sellers next month

The Young Players who can Transform Bulgarian Football

When leading a parliament includes helping the police raid lawmakers