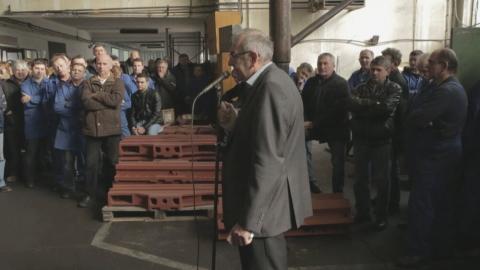 ITAS Prvomajska, which produces machine tools and employs around 125 workers, is unique among factories in Croatia in that those who work there own roughly half of the shares in the company, a model known as 'workers' self-management' with roots in socialist Yugoslavia, of which Croatia was once a part.

The workers took over the factory in 2005. A decade later, Kovacevic began filming. Six years on, as 'Factory to the Workers' opened the 14th edition of Zagreb's Subversive Film Festival on October 3, the workers are still fighting.

In the film, salaries are late or not paid in full; those who began the fight have died or retired; while the younger ones feel less of a personal connection and often leave for better-paid jobs elsewhere.

Scenes from Srdjan Kovacevic's documentary. Photo: Courtesy of the director.

The film, he said, "manages to show, realistically, observationally, how people work and think as well as the complex problematic of a factory that is in the hands of the workers."

Today, ITAS Prvomajska is clinging on, having recently reached a pre-bankruptcy settlement under which half its debt has been waived and the firm has five years to pay off the rest.

Kovacevic spent five years making the documentary - his first - while doing all the filming himself and visiting the factory every week.

The result is a poetic portrayal of the clash between the factory's ownership model and the forces of global capitalism. It shows, too, the passage of time, the wait for machines to finish and salaries to arrive.

Kovacevic's camera lingers on the faces of those fighting to save their factory, some of them falling, others leaving or, in the case of factory director Bozo...

"Bosnia-Herzegovina will not survive, same as Yugoslavia hadn't made it"