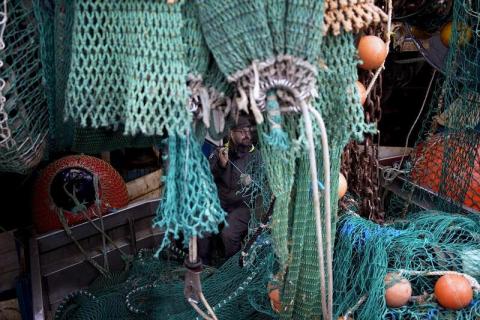 A smouldering row between London and Paris over post-Brexit fishing rights has flared up, with France threatening trade disruptions from next week if its boats are not granted more access to British waters.

The measures targeting British fish exports from November 2 would include "systematic customs and sanitary checks on products brought to France and a ban on landing seafood", French government spokesman Gabriel Attal told reporters on Oct. 27.

Europe Minister Clement Beaune said extra checks could also be extended to "other merchandise" by "reinforcing our procedures and controls compared with current practices".

Tweeting in response to Beaune, London's Brexit minister David Frost posted a government statement that "France's threats are disappointing and disproportionate, and not what we would expect from a close ally and partner".

"The measures being threatened do not appear to be compatible with the (post-Brexit) Trade and Cooperation Agreement and wider international law," the statement continued.

It said London would meet any French moves with "an appropriate and calibrated response".

The latest spat between the neighbours was sparked by licensing rules for EU fishing boats wanting to operate in waters around Britain and the Channel Islands after Brexit.

France has been incensed by the rejection of French boats by Britain and the self-governing Channel Islands of Jersey and Guernsey, which depend on London for defense and foreign affairs.

While targeted measures for the fishing sector would hurt British exports, broader customs checks have the potential to seriously slow down trade with the U.K..