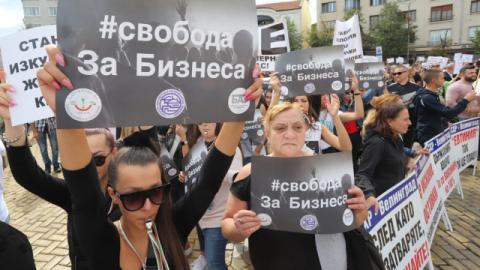 Associations of restaurants and the tourism industry are organizing a national protest today under the motto: "Everyone TOGETHER! For health, work, future, security! "

The protest is against the health measures of the caretaker government, which according to business representatives are inadequate, and the system for applying green certificates is discriminatory and, in addition to not solving the problems of the health crisis, deepens the economic one.

In Sofia, the demonstration will begin at 3 pm on Orlov Most.

In Plovdiv, the protest of owners and employees of restaurants will block one of the busiest intersections in the center - the one near Banya Starinna.

A protest march against the requirement for a green certificate is also expected in Burgas at 5.30 pm Late yesterday, nearly 80 people joined the march in the city.

In Pleven, the protest march is planned for 15 hours from Stefan Stambolov Square to the building of the district administration.

Ognyan Georgiev has four restaurants and 50 staff members. He is the regional coordinator of the Bulgarian Association of Restaurants in Pleven.

In Blagoevgrad, a demonstration of those affected by the...