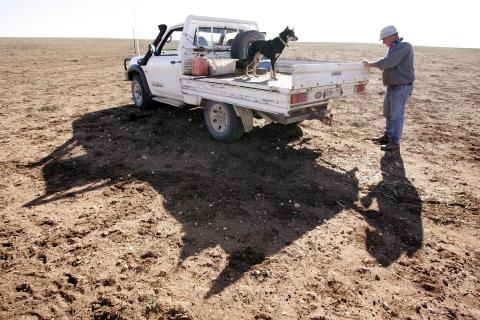 From Death Valley to the Middle East, the Indian subcontinent to sub-Saharan Africa, global warming has already made daily life unbearable for millions of people.

And if nothing is done to slow climate change, the record temperatures and deadly heatwaves it brings will only get worse, experts warn.

"Climate (change) is sort of steroids for the weather. It's loading the dice to make these sort of extreme events be more common," said Zeke Hausfather, a climate expert at the Breakthrough Institute in California.

The hottest place in the world is officially Death Valley, California. There too, temperatures are rising.

"If you look at the average temperature in Death Valley for a summer month (...) it has gotten much warmer in the last 20 years than it was before," said Abby Wines, spokesperson for the Death Valley National Park.

This summer, for the second year in a row, the area registered an astonishing 54.4 degrees Celsius. If confirmed by the World Meteorological Organization, it would be the hottest temperature ever recorded with modern instruments.

According to the U.S. climate agency NOAA, July 2021 was the hottest month ever recorded on Earth.

"We are affected a lot by this unbearable heat, and we poor are hit the hardest," said Kuldeep Kaur, a resident of Sri Ganganagar in the northern Indian state of Rajasthan, bordering Pakistan.

Half a world away in western Canada, where a so-called "heat dome" pushed temperatures above 40 degrees Celsius this summer, north Vancouver resident Rosa lamented: "It's just unbearable. It's impossible to be out."

Rising temperatures are a driving force behind more frequent and intense droughts, wildfires, storms, and even floods. And the rising number of heatwaves...

Afghan girl from famous cover portrait is evacuated to Italy

UK ends self-isolation for vaccinated people from countries including Turkey