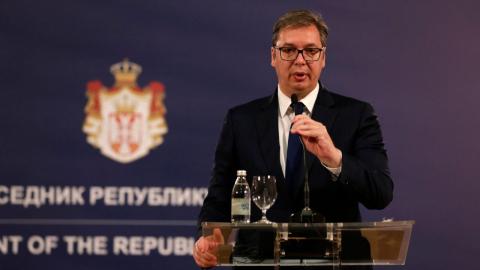 Serbia's President Aleksandar Vucic on Friday rejected claims that he participated in a war crime in Croatia in 1991, after a Croatian newspaper reported that a trial witness testified that Vucic threatened him with death.

He said he did not go to Croatia during the war "all the way until the end of 1994 or 1995, when I went as an SRS [Serbian Radical Party] official, for two days, when we went on a [election] campaign in [Serb rebel-held] Serbian Krajina".

He also said that he had "never been to Petrinja [where the prisoner was captured] in the whole of my life, never".

Croatian newspaper Vecernji List reported on Thursday that a witness that it named as Kosta D. told a war crimes trial in Zagreb that Vucic was present when he was captured in September 1991 and threatened to kill him.

The witness said that "I remember when the current president of Serbia, Vucic, as if I were watching him now, came up to us and said that he would kill and slaughter", Vecernji List reported.

"Vucic told me that, as a Serb, I had betrayed the Serbian people and that he would slaughter me last," he added.

The witness was testifying at the trial of Serb ex-fighters Dusan Jovic, Milo Paspalj, Vlado Cupovic and Marko Vrcelj, for war crimes against civilians and prisoners of war in 1991 in the Glina area, where Petrinja is located. They are being tried in their absence.

Vucic said that during this period, he was a student and that his political career only started in 1993 when he joined the Serbian Radical Party.

He argued that in Croatia, "some people are tried on the basis of...