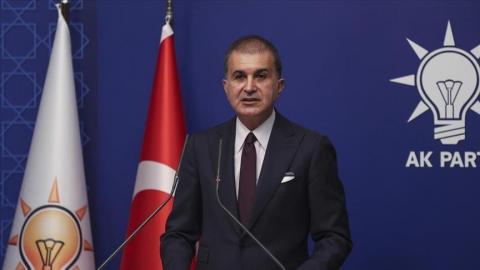 "De facto terrorist statelets" would have emerged across Turkey's southern borders with Iraq and Syria had Ankara not conducted its anti-terror operations in recent years, the spokesman for AKP said on Oct. 28.

Turkey "will never allow" any terrorist formation near its borders or tolerate such statelets Ömer Çelik said after a meeting of the AK Party's Central Executive Board headed by President Recep Tayyip Erdoğan in the capital Ankara. The closed-door meeting lasted for nearly 90 minutes.

The Turkish Armed Forces entered the region before such formations could be established, added Çelik.

Turkey's parliament on Tuesday ratified a motion extending the government's authorization to launch cross-border anti-terrorist operations in northern Iraq and Syria for two more years, as well as continued participation in a Lebanon peacekeeping mission.

Since 2016, Turkey has launched a trio of successful anti-terror operations across its border in northern Syria to prevent the formation of a terror corridor and enable the peaceful settlement of residents: Euphrates Shield (2016), Olive Branch (2018), and Peace Spring (2019).

It also launched the Pence operations as a series of offensives since 2019 against terrorist organizations in northern Iraq, particularly the PKK.

In its more than 35-year terror campaign against Turkey, the PKK - listed as a terrorist organization by Turkey, the U.S., and EU- has been responsible for the deaths of at least 40,000 people, including women, children and infants. The YPG is the PKK's Syrian offshoot.

On a recent joint statement of 10 countries' ambassadors in Ankara on the ongoing trial of Turkish businessman Osman Kavala, Çelik said it was neither...