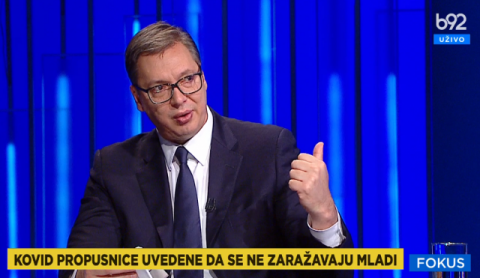 "This man hadn't invented this by himself. I have never been to Petrinja in my life. I was in Glina in 1995 with the Serbian Radical Party. We were there for two days. Mr. Paspalj was sitting in the audience then, so it was then that I saw him for the first time," Vucic said.
"I have never been on the territory of the Independent State of Croatia, as they say. I guess I was not brave enough, so I did not apply as a volunteer. I was 21 year old and studied in Belgrade. They are aware that this is the most common lie because other witnesses said that of course they never saw me. I was not involved in politics, I was not a member of the SRS at all at the time".
As he says, he draws one very good thing from this - they have shown what kind of witnesses they have. "This would have been a kind of crescendo, I don't know what else they could invent. Croatian state is disgraced and it will be talked about, these are witnesses who talk about their actions," the president was clear.
He also mentioned the European Union, saying that "this is a shame". "This is a shame for the EU and those who preach to us about the rule of law. I can find ten witnesses who will say that Plenkovic burned my house, but that has nothing to do with the truth, so I ask you - are you at least a little bit ashamed about what he said and wondered "why is this happening". "That's because they thought they were done with Serbia, that Serbia was buried for good."
Just to reiterate, in the last few days, there have been more and more accusations against Vui coming from the region.
"Veernji list" published the testimony of a "witness" who claims that he personally saw Aleksandar Vui beating Croats in Petrinja in 1991, torturing them and threatening to slaughter them.
...