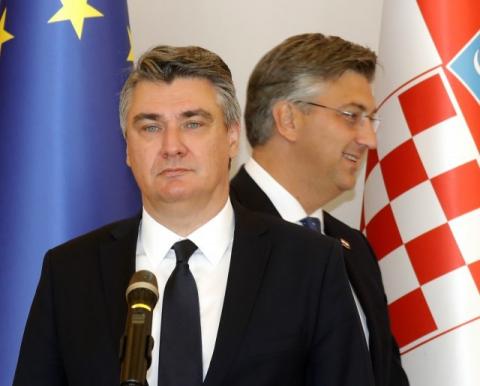 This was said by the interlocutor from the ruling party, commenting on the conflict that escalated between the President of the State Zoran Milanovi and the Minister of Defense Mario Banoi, i.e. the Government and Andrej Plenkovi, reports "Jutarnji list".
The fierce conflict has been going on for ten days now, and resignations are currently being demanded. Thus, the Minister of Defense, Mario Banoi, demanded the resignation of the Chief of the General Staff, Robert Hranj.
It's beyond his authority, because the minister cannot replace the head of the General Staff. According to the Law on Defense, the Chief of the General Staff is appointed by the Supreme Commander on the proposal of the Government, and his dismissal is also within the competence of the Supreme Commander.

He's looking for a reaction

The President of Croatia, Zoran Milanovi, on the other hand, is asking for the reaction of the Prime Minister, Andrej Plenkovi - "to talk to his protg and bring him to his senses".
"Or I should ask for the resignation of the minister and everything will stand still as long as that ignoramus is a minister," said President Milanovi. It is the epilogue of the conflict that began with Banoi's decision to retire Brigadier Elvis Burul, the commander of the Honorary Protection Unit. Mutual accusations, name-calling continued, harsh words and insults fell - from Pokemon, through violations of the law and authorizations, revenge decisions, ban on speech, to accusations by Andrej Plenkovi that it was a creeping coup d'etat.
How will this, so far the most serious conflict at the top of the government, unfold?
"This is a conflict that directly affects the functioning of the army. On the one hand, the president is behaving irresponsibly....