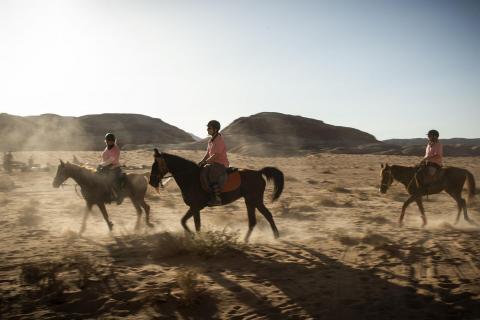 Galloping across the shimmering red sands of Jordan's spectacular Wadi Rum valley, more than one hundred riders on horses swept through the lunar-like desert as part of an epic long-distance race.

The race was won by another French team, Blue Ghallah, made up of three women and two men.

The cross-country team event, which organizers billed as an "orienteering and endurance equestrian race" across "sparse desert terrains, canyons and mountains" has previously taken place in India, Morocco and Oman.

"It is a great experience that allows us to discover a new country," said 27-year-old Camille Cerf, a model who won Miss France six years ago.

Organizers say the race draws not only on horse-riding skills, but also competitors' "stamina, their spirit of solidarity, as well as their self-discipline."

Riders included Emeline Parmentier, a 26-year-old Belgian who lost both her legs from above the knee in a car crash in 2019, and who took part using a specially fitted saddle.

"After the accident, I said to myself: Well I can't walk anymore, and if I don't walk I won't discover new things - now riding horses is like walking again," she said.

The race in Jordan brought together riders from across Europe, and as far as Argentia, the United States, Indonesia and Japan.