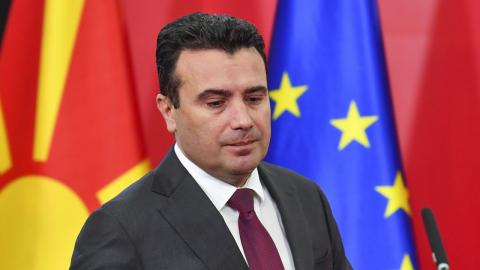 In an address late on Sunday evening, Zoran Zaev said he is resigning from his position as North Macedonia's Prime Minister and as leader of the Social Democrats, after the party's defeat in the capital of Skopje and other important towns to the opposition right-wing VMRO DPMNE party during the election runoffs this weekend.

"I take responsibility for the electoral results. I am tendering my resignation both as Prime Minister and as head of the Social Democrats," Zaev said at a press conference in Skopje late last night.

His resignation came shortly after it became clear that the Social Democrats failed to improve their results in the second round of local elections.

The Social Democrats' mayoral candidate lost the race in the capital of Skopje to his competitor who is supported by the opposition VMRO DPMNE, Danela Arsovska, as well as other local races in several other large municipalities that form part of Skopje.

They were also defeated in several other important towns such as Bitola, Ohrid and Kumanovo.

Congratulating his opponents, Zaev, however, remained adamant that the country does not need to move towards early general elections, and that the majority he enjoyed in parliament should carry on without him.

"I will stay in the immediate period ahead, while I am needed, so that a new government is organised with [the support of] the progressive majority [in parliament]...