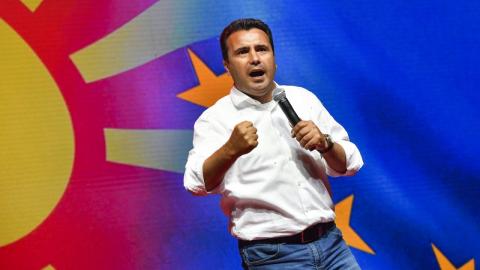 Ahead of Zaev's expected formal departure, the ruling Social Democrats on Monday took the first steps to try to preserve their thin parliament majority without him in charge.

They summoned the heads of smaller political parties that form part of the majority to a meeting at the government building on Monday afternoon to discuss their next moves.

Zaev, who tendered his resignation on Sunday evening from the prime ministerial post and from the helm of the Social Democrats after his mayoral candidates did badly in local election run-offs, sounded convinced that his party would manage to stay in power.

"I will stay in the immediate period ahead, while I am needed, so that a new government is organised with [the support of] the progressive majority [in parliament] which is there, and might get bigger," Zaev said.

The main one is whether the ruling coalition's already thin majority, resting on only 62 MPs in the 120-seat parliament, will survive without Zaev. Even if one small political party leaves the alliance, its majority will crumble.

This uncertainty is being exacerbated by the fact that so far there are no obvious successors to Zaev, both as premier and in his party.

Zaev's resignation seemingly caught even his biggest ruling partner, the Democratic Union for Integration, off guard. Its leader Ali Ahmeti insisted just three days ago that Zaev wouldn't quit, as these...