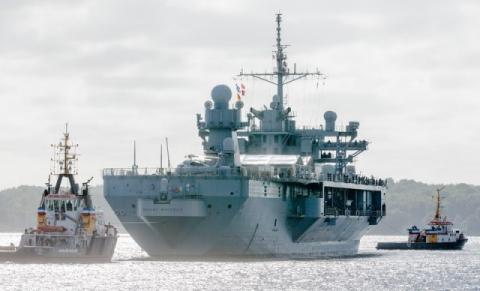 According to the world media, the forces of the Sixth Fleet are in question which headed to the Black Sea in order to carry out operations with NATO allies and partners. The exercises will also be performed in the Mediterranean Sea.
"The Command Ship of the Sixth Fleet, USS Mount Whitney, has begun transit to the Black Sea for operations with NATO allies and partners," the Sixth Fleet said in a Twitter post.
At the end of last week, the command of the USA and NATO announced that exercises would be carried out in the Mediterranean and the Black Sea, the goal of which was to ensure security and stability in the region.
In addition, the American destroyer Porter, armed with cruise missiles, sailed into the Black Sea two days ago, but it is not known whether its sending to the region is related to the announced exercise, RIA Novosti reports. The Porter-class destroyer is being monitored by the forces of the Russian Black Sea Fleet.
Russian Foreign Minister Sergei Lavrov said earlier on Sunday that the fact that the United States is sending military forces to the Black Sea does not contribute to stability in relations between the two countries, reports Sputnik.