The West is Indulging Dodik’s Secessionist Fantasy in Bosnia 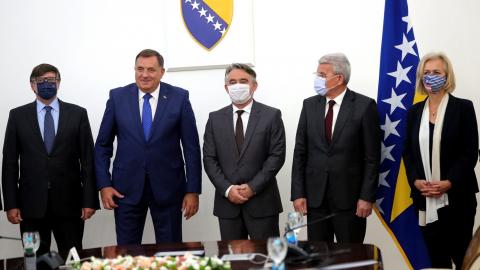 The RS is almost wholly economically dependent on Sarajevo, and on increasingly frequent financial transfusions from Belgrade. It is not even geographically contiguous; it is sparsely populated; it has little in the way of industry; it is internationally isolated - and as the territory is a direct product of genocide, it has something of a PR problem, in hoping to win any kind of international recognition or legitimacy, to say the least.

Above all, Dodik's sovereigntist fantasies are stymied by the simple fact that majority of the Bosnian population will not allow the RS to exit the Bosnian state without a resumption of hostilities - ones which the regime in Banja Luka is ill-equipped to triumph in, despite years of investments in its paramilitary capacities.

Dodik's experiment instead is about whether the EU, the US, or the UK will enforce any meaningful red lines in the Western Balkans, or whether Washington, Brussels, London, and the various EU member states have collectively decided that in Bosnia, - and, by extension, the region as a whole- everything is allowed and nothing is off limits.

If the answer to these questions is yes - and the lackadaisical reaction from key Western capitals to his increasingly militant antics suggests they may very well be - then Dodik reasons he has a novel opportunity. He, a formerly provincial "hetman", could accomplish what Slobodan Milosevic, Radovan Karadzic, and even his current benefactor, Aleksandar Vucic,...