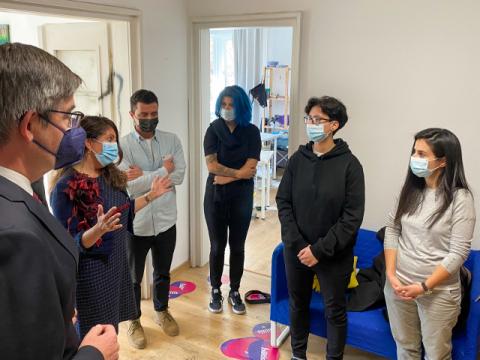 Western embassies issued a statement in support of the LGTBQI+ Center located in Sofia after it was attacked by far-right nationalists on Saturday.

The Embassies of the United States of America, Australia, Belgium, Canada, Denmark, France, Ireland, the Netherlands, Portugal, Spain, and the United Kingdom strongly condemn the October 30 attack against the Rainbow Hub, a home for Bulgarian organizations that promote equality and the protection of the rights of LGBTQI+ persons.

On November 1, Ambassadors Mustafa, Dixon (UK), Feeney (Ireland), Nielsen (Denmark), Robine (France), van der Burg (the Netherlands), and Chargé d'Affaires Beckers (Belgium) visited the Hub to express solidarity with our friends and partners in the face of this senseless attack. LGBTQI+ rights are basic human rights, and like many Bulgarians we reject violence and intolerance, which have no place in any democratic society.