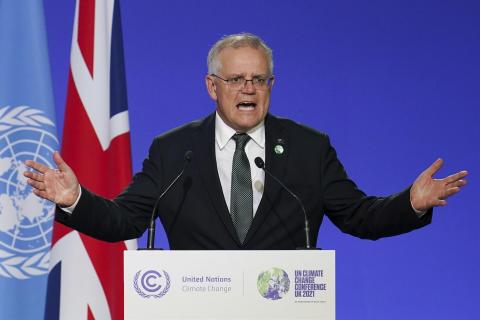 An Australia newspaper cast doubt on President Joe Biden's explanation to Macron last week that the U.S. leader thought the French had been informed long before the September announcement that their 90 billion Australian dollar ($66 billion) submarine deal with Australia would be scrapped.

Macron this week accused Morrison of lying to him at a Paris dinner in June about the fate of a 5-year-old contract with majority French state-owned Naval Group to build 12 conventional diesel-electric submarines. Australia canceled that deal when it formed an alliance with U.S. and Britain to acquire a fleet of eight nuclear-powered submarines built with U.S. technology.

Morrison told Australian reporters who had accompanied him to Glasgow, Scotland, for a U.N. climate conference that he made clear to Macron at their dinner in June that conventional submarines would not meet Australia's evolving strategic needs.

Two days before Morrison, Biden and British Prime Minister Boris Johnson announced the nuclear submarine deal, Morrison attempted to phone Macron with the news, but the French leader texted back saying he was not available to take a call, The Australian newspaper reported.

Macron asked: "Should I expect good or bad news for our joint submarines ambitions?" the newspaper reported Nov. 2.

A journalist asked why Morrison decided to leak the text message after Macron accused him of lying, but the prime minister did not directly answer.

"I'm not going to indulge your editorial on it, but what I'll simply say...