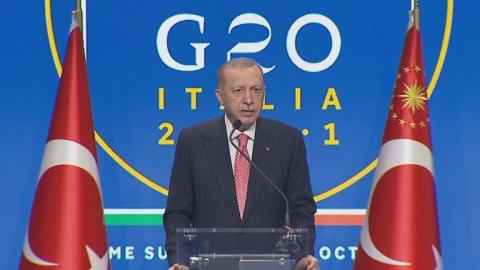 Following his meetings with US President Joe Biden Joe Biden and French President Emmanuel Macron on the sidelines of the G20 summit in Rome, Turkish President Recep Tayyip Erdogan has come under fire from the opposition Republican People's Party and a segment of the Turkish media over his failure to secure a US commitment on how Ankara will recoup the $1.4bn that it has paid for the purchase of American next-generation F-35 joint strike fighter jets.

The US removed Turkey from the programme due to its purchase of Russian S-400 missile systems, which infuriated the US Congress and the government.

Erdogan reportedly also complained to Macron about his sale to Greece of French Belharra frigate and Rafale fighter jets, which he said, according to Greek media reports, that Athens cannot afford as it has a debt of 300bn euros.

In July, 2019, a White House statement explained its decision to kick Turkey out of the F-35 programme in detail.

"Turkey's decision to purchase Russian S-400 air defense systems renders its continued involvement with the F-35 impossible. The F-35 cannot coexist with a Russian intelligence collection platform that will be used to learn about its advanced capabilities," the statement read.

"Turkey has been a longstanding and trusted partner and NATO Ally for over 65 years, but accepting the S-400 undermines the commitments all NATO Allies made to each other to move away from Russian systems.»

Erdogan discussed with Biden Ankara's proposal to recoup its money by purchasing 40 F-16 fighters and by securing kits for the upgrade of its existing fleet of F-16.