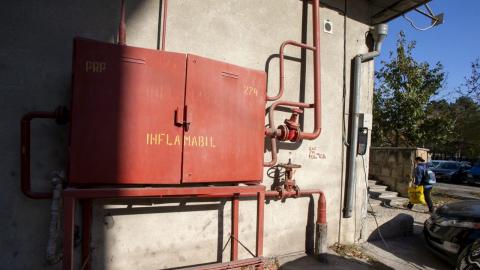 Moldova's Deputy Prime Minister Andrei Spinu announced on Wednesday that the government is preparing several mechanisms to compensate people on modest incomes as consumers anxiously await their next gas bills to see how increased prices for gas supplies will affect them.

The price that Moldova pays for Russian gas imports rose sharply in October from to $790 for 1,000 cubic metres. In the third quarter of this year, the average price was close to $300.

Alina, 40, a mother of two children living in the Botanica district of the capital Chisinau, said she was worried about how much she will be asked to pay.

"We used to pay a bill of about 1,100 lei [55 euros] per month during the cold season. I am afraid the cost could be twice as high than last year. I hope the state will actually give us some financial aid," Alina told BIRN.

Veaceslav, 46, from the northern town of Balti, also expressed concern about his next bill.

"Russia put us in a tough spot with these new gas prices. We have to see how this situation will change our next gas bill. The state promised us some help, but let's wait and see," he said.

Moldova and Gazprom signed a new five-year deal last Friday, and November, the price is estimated to be about $450 per 1,000 cubic metres.

The government will compensate people because the higher price that Moldova is paying for Russian gas imports will also raise the cost for the domestic consumers.

"There are two separate mechanisms. First, the social protection mechanism that comes with a monthly amount for low-income families. The second aid mechanism for bills is intended to be applied depending on consumption," said Spinu.

Moldova in 2022: Reformists in Power in Year of Turbulence