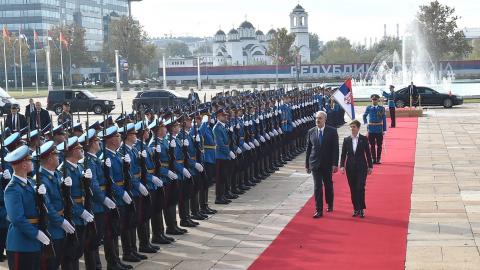 "Unfortunately, there were poison-arrow messages coming through the media, which no one needs. We need to forget what happened and look for areas that connect us. Let's not touch on the disputed points at this moment and focus on the economy," Krivokapic told media at a press conference in Belgrade.

Montenegro's former government had disputes with the Serbian authorities related to the status of the Serbian Orthodox Church and the Serb minority in the country. Belgrade accused it of anti-Serb politics, while it accused Serbia of political interference in Montenegro.

Even after the opposition blocs ousted the Democratic Party of Socialists' government last year, the new government has failed to improve relations with Serbia and resolve disputes between the two countries.

It refused to reverse a decision to expel Serbian ambassador Vladimir Bozovic, who the Democratic Party of Socialists' government declared persona non grata for his allegedly unacceptable statements about Montenegrin history and statehood.

In June this year, Serbian officials were furious when the Montenegrin parliament adopted a resolution recognising the Srebrenica massacres by Bosnian Serb forces as genocide. Serbian President Aleksandar Vucic claimed that the resolution "leaves a stigma on an entire nation".

Brnabic said on Wednesday that the two premiers decided not to tackle such disputes during Krivokapic's first official...