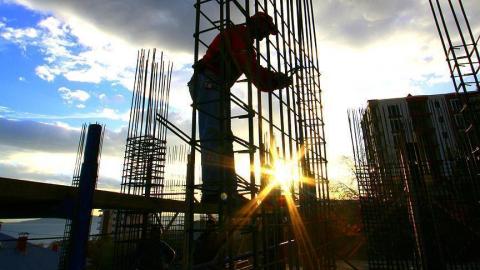 Turkish companies have assumed 196 building projects abroad, which have a total volume of $20.3 billion in the first 10 months of this year, according to a business association.

Thus, the Turkish construction sector has achieved its target for the whole of 2021 two months earlier, the Turkish Contractors Association (TCA) said in a statement on Nov. 2.

The average price of tenders won by Turkish contractors abroad reached a new record at $103 million, according to the statement.

"Reaching the target of $20 billion before the end of the year after a two-year break caused by problems in the global market ahead of the novel coronavirus pandemic and then with the effects of the pandemic conditions has shown the determination of the Turkish contractors to do business," TCA head Erdal Eren was quoted as saying in the statement.

"Hitting an all-time high in the average project price shows that our contractors assume larger works in the world," he added.

The previous record in the average price of tenders won by Turkish contractors was $83 million in 2015. In the following years, that figure dropped nearly by half.

The largest market for Turkish contractors abroad is traditionally Russia. The rise of energy prices has helped increase activities of Turkish contractors in the oil and gas exporter country, hitting a record level of assumed works with $7 billion, Eren said.

Turkish companies have been more active in Iraq, another energy exporter, and Sub-Saharan African countries, where development projects continue to expand steadily.

Kazakhstan, Slovenia, Poland, Algeria, Azerbaijan, Ukraine and Romania have been other top markets for Turkish contractors so far this year.

"In the medium term, we can assume...