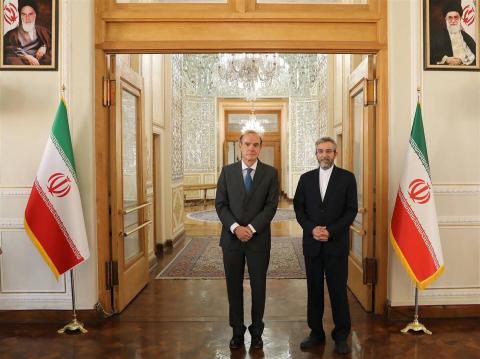 Iran agreed on Nov. 3 to resume talks on November 29 with world powers on reviving a nuclear deal after a five-month gap, with the United States urging a quick resolution.

The indirect negotiations in Vienna come amid mounting pressure on Iran, with Western nations warning that the clerical state's nuclear work is advancing to dangerous levels and Israel threatening to attack.

President Joe Biden took office hoping to return to the 2015 agreement from which his predecessor Donald Trump bolted.

But the talks earlier this year failed to secure a breakthrough with Iran, which requested a pause after the June election of a new hardline president, Ebrahim Raisi.

In Washington, State Department spokesman Ned Price said that the United States believed it is possible to resolve "quickly" the "relatively small number of issues that remained outstanding at the end of June."

"We believe that if the Iranians are serious, we can manage to do that in relatively short order," Price told reporters.

"But we've also been clear, including as this pause has dragged on for some time, that this window of opportunity will not be open forever."

Trump slapped sweeping sanctions on Iran as he withdrew the United States in 2018, leading Tehran to take steps out of compliance with the deal through which it had been drastically scaling back sensitive nuclear work.

Iran wants a lifting of all U.S. sanctions but the Biden administration says that it will only negotiate measures taken by Trump over the nuclear program, such as a unilateral U.S. ban...